WITH AUTHOR AND PHOTOGRAPHER LISA JOHNSON
What were your first inspirations in music?

I grew up listening to and loving classic country music. My parents played Merle Haggard, Patsy Cline, Tammy Wynette, Gary Lewis and the Playboys, Marty Robbins, Johnny Cash, Loretta Lynn and others. My dad, originally an electrician and then a cameraman in Hollywood, moved to a farm on the Canadian plains north of Edmonton after my parents’ divorce and threw a hootenanny every summer where serious musicians would come together to play. He let me sing on stage there; I had a couple of favorite songs I had learned from both of my grandmothers. I remember guys showing up in their motor homes from all over and they all had amazing vintage guitars; their prized possessions. My dad is an avid player and my mother has a wonderful voice. Music was an integral part of my life–always. I was 12 when I went to my first concerts; KISS, then Alice Cooper in Edmonton; I became addicted to going to concerts and still have all my ticket stubs. My first teenage boyfriend had one of those souped-up vans with custom interiors. The stereo speakers in the doors were shaped like big velvet red mushrooms. We’d go out into the country with friends on weekends, build bonfires and blast out Fleetwood Mac, Boston, AC/DC, Alice Cooper. I grew up on those tracks. These moments were the ones that really ignited my lifelong love of classic rock. 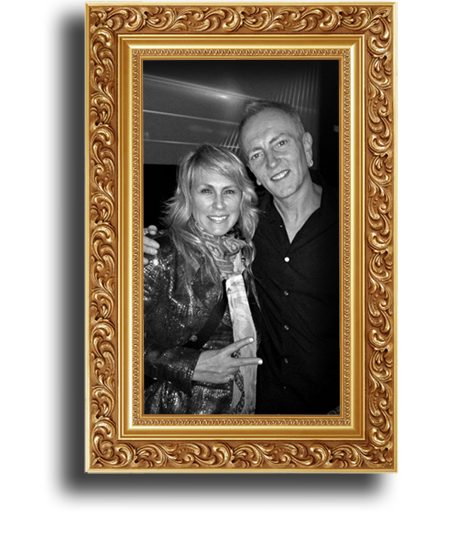 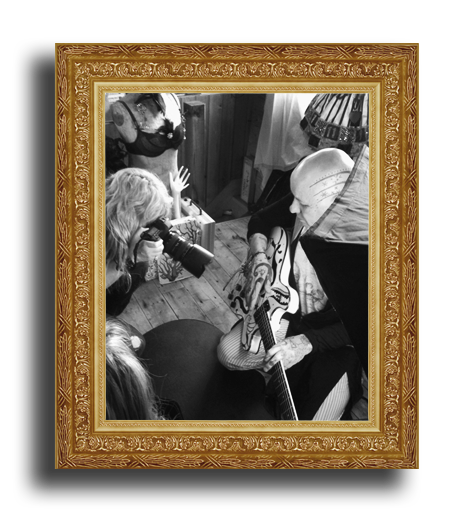 You have led a very glamorous life in recent years, living in Las Vegas and Malibu and traveling the world to shoot the guitars in this book. Where did you come from?

Ask a question like that and you will learn something surprising. I grew up very poor. When I was seven, we moved from Hollywood to Slave Lake, Alberta, a couple hours north of Edmonton in the middle of Indian lands. My dad had family there, an aunt and uncle who owned a grocery store and a summer resort. We lived in a trailer and at one point drove around town in an old car with no muffler. I still remember how loud that car was when we pulled into town. We were foreigners in this place; I was the only blonde kid amongst a sea of Native Indians–I got teased a lot and had to learn to make my way. I remember watching commercials on TV and saying to myself, “When I grow up, Iʼm gonna go back to Hollywood, thatʼs my home, and now here I am.”

After my parentsʼ divorce, my mom made $5 an hour working in a grocery store and somehow supported my sister and I. We lived a very simple life, but music brought us together. We would sing while my mom cooked. My mom used to get up early sometimes to go out to fish for our supper. I remember getting up one morning when sheʼd already left for work, and found a fish swimming in the kitchen sink!

You had a great job traveling the US for Kodak working with commercial photographers. Who did you meet in those days?

I really learned how to be a photographer while working for Kodak. I met some incredible people, some of whom became mentors. At one point, Kodak sent me to Manhattan where I met iconic photographers, among them fine art legend Joyce Tenneson, rock ʻn roll photographers Mick Rock, Bob Gruen and Jim Marshall, celebrity portrait photographers Timothy Greenfield- Sanders and Timothy White. Joyce encouraged me to pick a signature style and learn to master it. I owe her a lot of gratitude for that.

I met Les Paul at the Iridium Room, a club in New York where he had a standing Monday night gig. Hugely famous musicians would come by to sit in with him. I got to know Les, his Trio and met Bucky Pizzarelli, Howard Alden, Jose Feliciano, John Scofield (Miles Davis, Charles Mingus) and others. I just hung out. I met a woman named Virginia Lohle, a client of mine with Eastman Kodak, who founded StarFile Photo Agency, a major distributor of photos to magazines such as People. She facilitated my shoot of Eric Claptonʼs guitar collection. Also through Kodak I met a master color printer, Carol Fonde who introduced me to Lou Reed, who then allowed me to photograph his guitars. 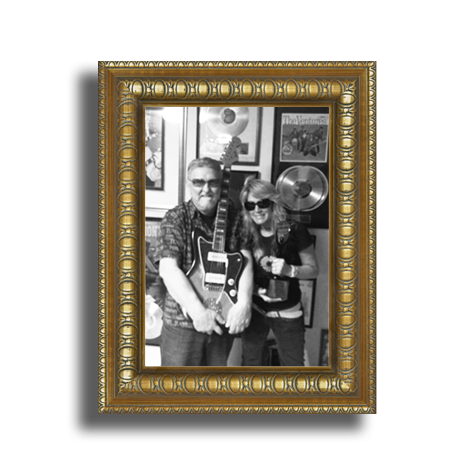 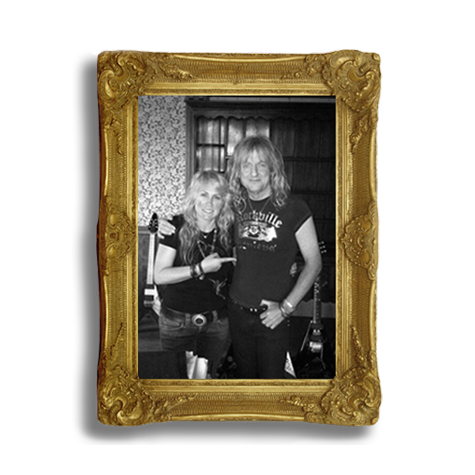 Many of your stories about working with these famous guitars and owners of guitars are in your book. Can you tell us one that didnʼt make the edit?

My friend and client Virginia Lohle, facilitated my photographing the first set of guitars Eric Clapton auctioned to raise funds for Crossroads in 1991. She was providing all of the images for the Christies catalogue. I wound up being the only one to photograph those guitars the day before the auction. I had limited time and bad lighting. I used a new color infrared film–by Kodak of course and after sweating through the pressure of shooting those babies in only an hour, the infrared film translated the wood of the guitar to yellow. I was devastated. I decided to turn the mistake to my advantage and converted them to black and white internegs and they turned out gorgeous. So the original color photos didn’t make the book but the black and white ones did!

Tell us about one of your most memorable shoots?

Well that would definitely be shooting Keith Richardsʼ and Ronnie Woodsʼ guitars. Just getting access was a long process. There is a lot of genuine schmoozing that goes on, which makes my job really fun. I get to know people in unusual situations. Itʼs not as easy as just picking up the phone and booking a time to photograph something.

During my many conversations with Keithʼs guitar tech, we talked about Canada. I wound up speaking to Charlie Wattsʼ drum tech because he is Canadian and heʼs the one who ultimately set up the shoot. Keith and Ronnie personally picked the guitars I shot. They are vintage and used during warm-ups but never on stage during a show in order to protect them. 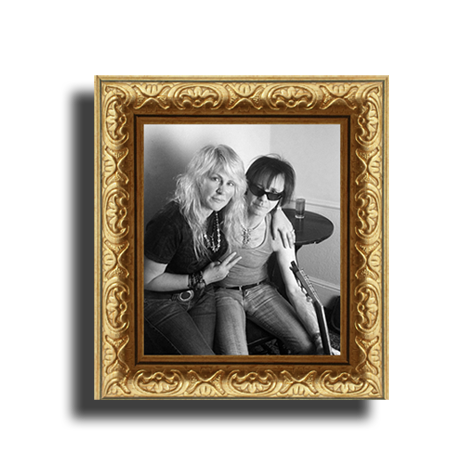 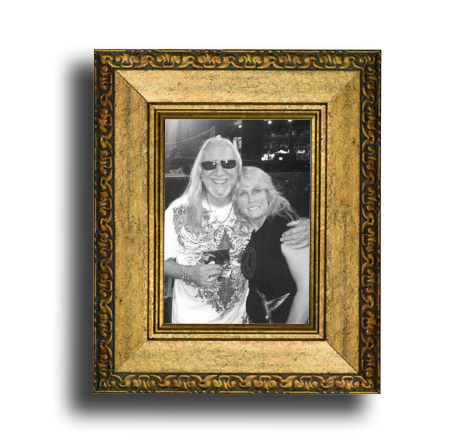 What was the most unusual location for a shoot?

That would have to be directly underneath “The Wall” the stage set for Roger Watersʼ The Wall Tour in Athens, Greece. Many of the shoots took place backstage in Las Vegas, Los Angeles and New York when bands came through town. But I also travelled around Europe and the States, sometimes to an artistʼs home, like when I shot Nils Lofgrenʼs guitar at his house in Arizona.

What emotions do you feel when youʼre shooting?

When Iʼm photographing itʼs euphoric. Itʼs like a meditation with a guitar – my entire being is inside the viewfinder and everything else ceases to exist. I remember the first time that happened – being inside the viewfinder – there was a vibration inside me and my heart rushed intensely. Iʼm usually under a lot of pressure because I promise to take only one hour to shoot- itʼs my one chance to be in the presence of this really special entity–Iʼve got to get the shot. Sometimes itʼs a workout and I find myself sweating like mad. Iʼm so in love with what Iʼm doing, Iʼm driven to pick up the phone and make these requests. Itʼs not easy. Of course it gets easier when I can say that I already shot Les Paulʼs, Keith Richardsʼ, and Ace Frehleyʼs guitars (laugh).

What do you want viewers of the book to feel?

I hope viewers will look at the images as artwork rather than just see an object from a technical standpoint. I want them to say, ʻWow. Cool, Look at the etches on the pick guard of Keithʼs guitar.ʼ Or the messages such as ʻArm The Homelessʼ that Tom Morello (Rage Against The Machine, AudioSlave) has inscribed on his. I want them to see the detail, the stickers, the personalization of the guitars that they canʼt see unless theyʼre up close and I want fans to gain a new understanding of the artist because they see the guitar from a different perspective.

How long has this project taken to finish?

How did you come up with the concept for 108?

My spiritual life is the basis of my life and my work. In the yogic tradition, the prayer bead string is called a mala and has 108 beads on it. The beads are used, like a Catholic rosary, to count mantras. There are numerous explanations for the importance of this number; one of them is nine times 12: Both of these numbers have been said to have spiritual significance in many traditions. Nine times 12 is 108. Also, one plus zero plus eight equals nine. That nine, (times 12) equals 108. Another is the Sanskrit alphabet, which has 54 letters. (five plus four equals nine). Each has masculine and feminine, shiva and shakti. Fifty-four times two is 108. I was in India when the concept of 108 was presented. I wanted the book to have a spiritual message and artists to feel this was honorable, cool and unique and not just someone wanting to take advantage of their celebrity. A spiritual connection was important. 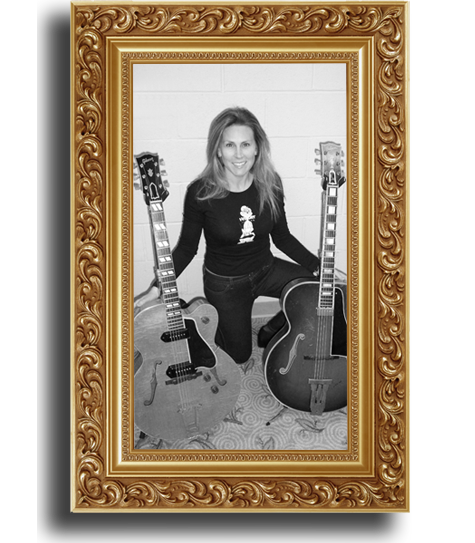